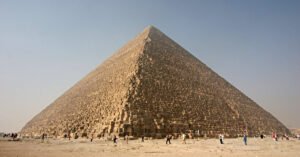 Back in January, when I started writing this novel, I had a solid premise in mind. I was eager to sit down and write my story.  Since then, I've had to scrap just over four thousand words because I didn't know what I was doing. The reason: I neglected to apply proper structure before I started writing. I did place them in an out file in case I need to look back at them but I felt dropping the words was the right thing to do.

Imagine if the builders of the Great Pyramid of Giza just started building before they planned it? Having structure to my novel will be the key to successful completion.

New ideas fueled my imagination every day, but without knowing where to place them, I only had ideas and sections of writing that were literally left hanging. My files were scattered, like a puzzle laid out before assembly, that I had to piece together.

To fix things I watched videos on YouTube, read about story structure on the Internet, and learned how to solve the problem. Now I  have a plan. There is a formula I am following to write this book.

Many years ago, I took a writing course that probably covered the three act model. At that time, I never ended up writing a book, so I forgot how to use structure to write my novel.

The three act model will be the foundation for my book. My protagonist will go through an initial setup, I will present her with confrontation, and finally resolution. It sounds pretty simple: one-two-three, doesn't it? Well, it's more complex than that but now that I have this structure in place, I know what I am doing and will stay on track.

Gordon W. Miller is a Canadian author who lives in the vibrant city of Nanaimo, BC.
Previous post